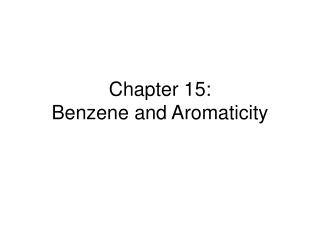 Chapter 15: Benzene and Aromaticity. Aromatic Compounds. Aromatic was used to described some fragrant compounds in early 19 th century Not correct: later they are grouped by chemical behavior (unsaturated compounds that undergo substitution rather than addition)

Aromatic compounds - . 2011-1432. 1. learning objectives. by the end of chapter four the students will:. understand the

Chapter 15 - . benzene and aromaticity. introduction. in early 19 th century, the term aromatic was used to describe some

5. Benzene and Aromaticity - . aromatic compounds. the term “aromatic” is used to refer to the class of compounds

Applications of UV-Vis Spectroscopy - . the molar absorptivity as seen earlier: validation of beer’s law is dependent