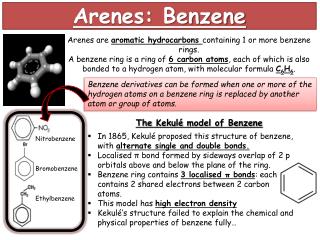 Arenes are aromatic hydrocarbons containing 1 or more benzene rings. A benzene ring is a ring of 6 carbon atoms , each of which is also bonded to a hydrogen atom, with molecular formula C 6 H 6. Arenes: Benzene.

ARENES - . part 6 aromatic chemistry bonding understand the nature of the bonding in a benzene ring, limited to planar

Arenes - . molecules that contain a benzene ring because they are derivatives of benzene. comparing reactions. examples