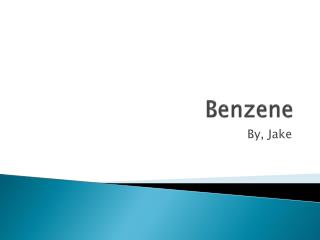 Benzene. By, Jake . What is Benzene?. Benzene is a colorless , flammable liquid with a sweet odor . It evaporates quickly when exposed to air.

Benzene - . benzene is a clear, colorless liquid with a sweet odor. it is a natural component of crude oil and refined