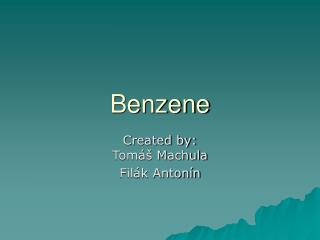 Benzene. Created by: Tomáš Machula Filák Antonín. Benzene. Benzene , also known as C 6 H 6 , Ph H , and benzol , is an organic chemical compound which is a colorless and flammable liquid with a pleasant, sweet smell.

Benzene - . benzene is a clear, colorless liquid with a sweet odor. it is a natural component of crude oil and refined