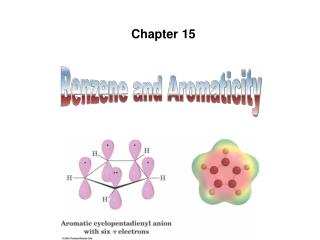 Chapter 15. Benzene and Aromaticity. Introduction. In early 19 th century, the term aromatic was used to describe some fragrant compounds Not correct: later they are grouped by chemical behavior (unsaturated compounds that undergo substitution rather than addition). .

Ch 19 Reactions of Benzene - . 1. give the products of the following electrophilic aromatic substitution reactions. also

Aromaticity: From Organics to Inorganics, From 2D to 3D - State key laboratory for physical chemistry of solid surfaces.

Chapter 8 - . aromaticity reactions of benzene and substituted benzenes. the first structure for benzene was proposed by

Arenes - . molecules that contain a benzene ring because they are derivatives of benzene. comparing reactions. examples

WORKING SAFELY WITH BENZENE - Overview. properties and sources of benzeneexposure limitsroutes of exposure and health

Chapter 9: Benzene and Its Derivatives - 2. benzene and aromaticitystructurestabilityaromaticitynomenclaturesingle