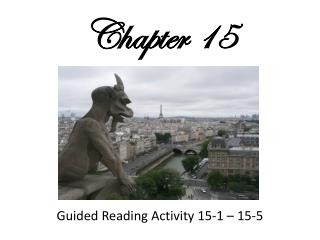 Chapter 15. Guided Reading Activity 15-1 – 15-5. Vocabulary Activity 15-1. 1. What is the term for people who are sent out to teach their religion? Missionaries 2. What person’s name means “Charles the Great”? Charlemagne 3. Who was the first Catholic king of the Franks? Clovis