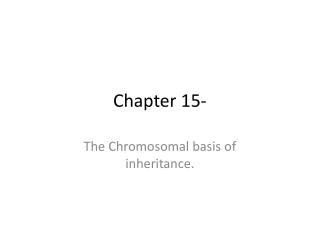 Chapter 15-. The Chromosomal basis of inheritance. Introduction. It was not until 1900 that biology finally caught up with Gregor Mendel. Independently, Karl Correns, Erich von Tschermak, and Hugo de Vries all found that Mendel had explained the same results 35 years before.