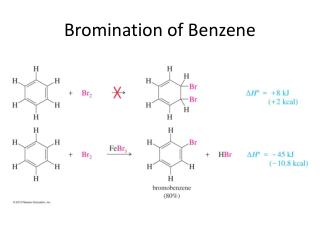 Electrophilic Aromatic Substitution (Bromination of Toluene) - . demonstration of the effect of an electron donar group

Substitution reactions of benzene - . l.o.: outline the mechanism for mononitration and monohalogenation of benzene.

The story of benzene - . write the electron configuration of carbon. how many electrons are there in its outer shell? how

The structure of benzene - . the electron config of carbon. this new hydrocarbon isolated by michael faraday in 1825

Chapter 20 Bromination - Purpose. this reaction involves nucleophilic attack by the alkene on bromine, forming a tertiary