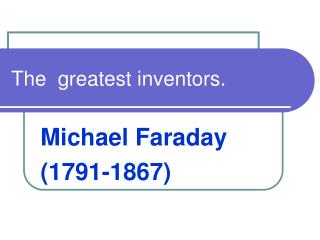 The greatest inventors. Michael Faraday (1791-1867). The aims of our lesson are:. to check up your home task to meet with the text about M.F., his biography and his experiments to discuss the information to revise your grammar (Passive Voice) to summarize the information.