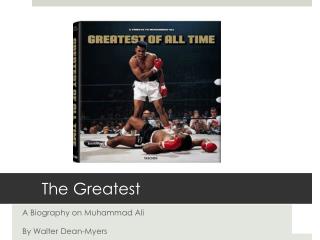 The Greatest . A Biography on Muhammad Ali By Walter Dean- Myers. Short Summary. “The Greatest Thing” - . the greatest thing in all my life  is knowing  you

The Greatest Roman - . produced by mr.

The Greatest Love - . • love is greater than smooth/gifted talking i corinthians 13:1 though i speak with the tongues