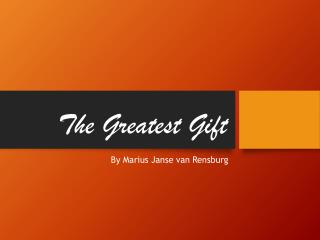 The Greatest Gift. By Marius Janse van Rensburg. Christmas. How Did Christmas Come to Be Celebrated on December 25? The Greatest Gift Of All - . nativity production lyrics and music by chris fuller script, cd and score available from

The Greatest Gift We Have to Give - . moving beyond fundraising to truly help our congregations thrive in today’s

The 3 Greatest Moments in accountant gift History - Things about