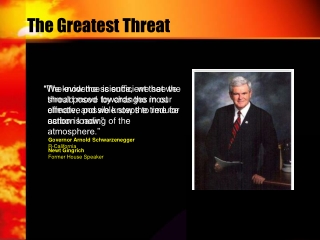 “The evidence is sufficient that we should move towards the most effective possible steps to reduce carbon loading of the atmosphere.” Newt Gingrich Former House Speaker. “We know the science, we see the threat posed by changes in our climate, and we know the time for action is now.” Moral Leadership - Conclusions of our first honesty studies: 1980. 1. dishonesty is the greatest threat to america's

Bomb Threat - . in person or over the phone. bomb and other threat. keep the caller on the line notify supervisor notify

LOS to VMT - . ?. vmt calculation tools and setting thresholds poking at a metric like a lab rat. www.fehrandpeers.

WHAT ARE THE GREATEST THINGS OF LIFE? PART 3 - . 1. love 2. our greatest purpose in life is to glorify our father in

Threat modeling - . aalto university , autumn 2011. threats. threat = something bad that can happen given an system or

What part are you to play in the Harvest? - . worries of life syria’s use of chemicals our threat to use force