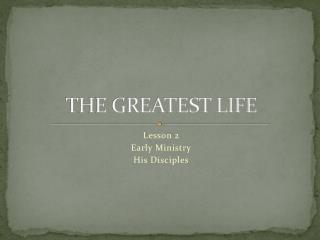 THE GREATEST LIFE. Lesson 2 Early Ministry His Disciples. kahuakaimen.wordpress.com. Please visit this site at least once a week, it will be constantly updated. Don’t Forget this. People Forget Jesus was a JEW HE was raised and lived by the strict law that was written down by Moses The Greatest Event In Life - . a glimpse into the traditional chinese wedding and a brief look at hu shih. david a smith.

Greatest Life Lesson 5 - . relationship with his disciples (jesus' core group) the beginning of the end. the