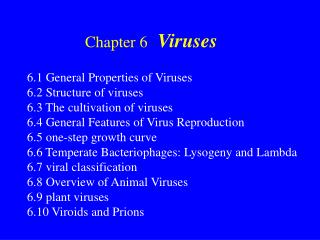 6.1 General Properties of Viruses 6.2 Structure of viruses 6.3 The cultivation of viruses 6.1 General Properties of Viruses 6.2 Structure of viruses 6.3 The cultivation of viruses

Introduction to Viruses - . the student should be able to. define the structure of viruses describe the importance of

A.Viruses - . are viruses living or non-living?.  viruses are not living  they have some properties of life but not

DOS Viruses: Boot viruses - . boot viruses are very serious viruses. though there are very few of them (only 5% of the

Viruses - . what is a virus?. viruses are not alive a virus in an obligate intracellular parasite requires host cell to

Viruses - . viruses. virus: a nonliving strand of genetic material within a protein coat. why are they considered not

VIRUSES - . viruses are not living…why?. viruses do not have a cellular structure like: cytoplasm organelles cell

Bacteria and Viruses - . chapter 20. viruses. viruses are particles of nucleic acid (either dna or rna) surrounded by a