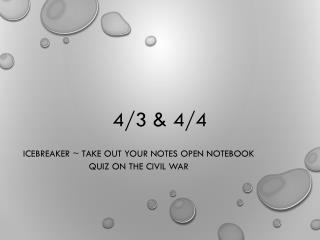 4/3 & 4/4. Icebreaker ~ Take out your notes OPEN NOTEBOOK QUIZ ON THE CIVIL WAR. Area of Study #7 ~ The Great Depression and the Americas 1929 – 1939. THIS WILL COVER TOPIC / QUESTIONS #13 & #14 ON YOUR EXAM HOMEWORK ASSIGNMENT FOR THIS UNIT ~ Answer one of the following essay questions

4-3 - . electron configurations. beaker breaker. an energy level of n=3 can hold how many electrons? the second quantum

3/4 - . through reading and discussion, s tudents will understand how to use the five paragraph essay structure as a

4 - 3 - . elements. pure substances. a substance made of one kind of material having definite properties. all particles