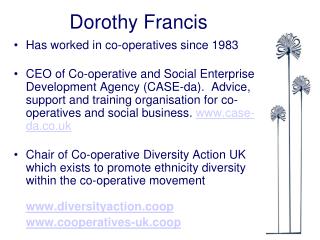 Dorothy Day - . &quot;your love for god is only as great as the love you have for the person you love the

DOROTHY DAY - . by: rudy checo. the beginning…. born in brooklyn, new york date of birth november 8, 1897 she had two

Dorothy Lavinia Brown - Who is she?. not a research scientistnot a nurses