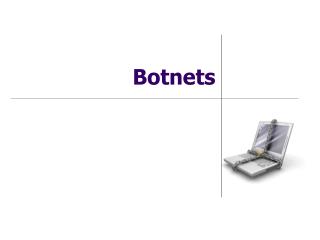 Botnets. Botnet Threat. Botnets are a major threat to the Internet because: Consist of a large pool of compromised computers that are organized by a master. a.k.a., Zombie Armies Carry out sophisticated attacks to disrupt, gather sensitive data, or increase armies Bots and Botnets plus - . forensic analysis of a bot. introduction. wayne hauber computer consultant since 1984 at iowa

COEN 252 - . security threats. hacking. untargeted attacks motivation is fun (i can do it) prevalent until ~2000

Botnets - By mohammad mehedy masud guest lecture. botnets. botnets. introduction history how to they spread? what do they

Botnets - Usman jafarey including slides from the zombie roundup by cooke, jahanian, mcpherson of the university of