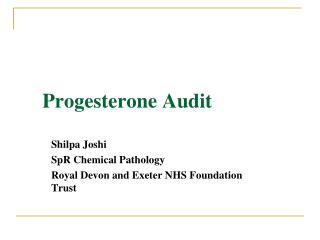 Estrogen and Progesterone - Progesterone and estrogen are the two most important hormones in the female body. these are

How To Increase Progesterone Levels? - Gautam clinic pvt ltd is one of the best sexology hospital in faridabad. read

Progesterone Hair Loss by Mor-Nutrition4life - People are losing big amounts of hair every day, but that isn’t that

Audit - . audit, oxford english dictionary: to make an official systematic examination of (accounts), so as to ascertain

Audit - . “ a critical systematic analysis of the quality of medical care – including outcomes use of resources and

Audit - . auditing : measuring something against a standard how do you know you…?. objectives. the student shall be