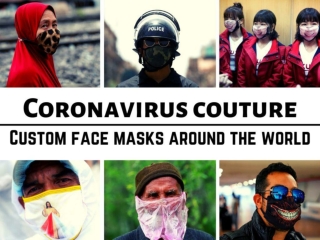 People around the world personalize the masks they wear to help slow the spread of the coronavirus. Eve's Couture - Get a chance to explore the trendiest designer women lawn collection online only at eveu2019s couture.

War Couture - . by adia. the beginning

Couture hair - Highlights from the alternative hair show in

Coronavirus! - If you are concerned about the coronavirus then search for n95 respirator masks, if you are going to the

Juicy Couture Jewelry - All cheap juicy couture jewelry on sale,check out now and you will be glad to find that you can

Doggie Couture Shop - At doggie couture shop, we are committed to offering the best premiere shopping destination for