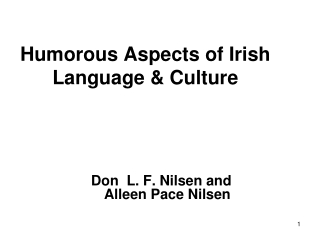 Humorous Aspects of Irish Language & Culture. Don L. F. Nilsen and Alleen Pace Nilsen. Irish Humor. Since Irish humor developed out of the oral tradition (the telling of jokes and stories in Irish pubs), it is very epiphenal in nature. Maroon Culture, Maroon Language - . nicole scott . aims. to discuss the impact of separation on culture and language to

Language Policies and Language Ideologies: Comparisons between the Irish and Galician Contexts - Irish and galician

Culture - . this presentation introduces students to the anthropological definition and use of the concept of culture. it

NAME OF YOUR CULTURE - . where can this culture be found?. why research this culture?. how many people are a part of this

Loanwords in the Irish language - . reflecting where we came from. why loanwords?. loanword: a word adopted from another

Aspects of Language - According to linguists, there are three key aspects of language: form meaning use. aspects of