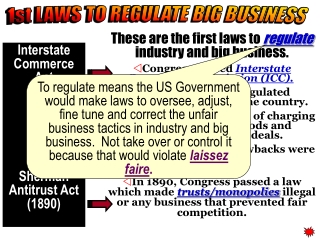 Business Laws related to HR - . prepared by, n.priyadharshini. compiled from: elements of mercantile law by

BIG BUSINESS - . read about three successful entrepreneurs talk about their business on page 22 ! what are the two most

Big Business - . ssush11 the student will describe the growth of big business and technological innovations after

Big Business - . corporations. corporations are essentially a big business owned by many people but treated as one person