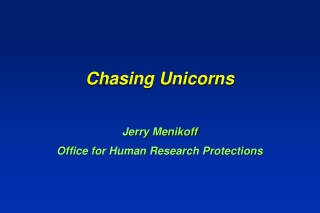 Chasing Unicorns. Jerry Menikoff Office for Human Research Protections. Disclaimer. The views expressed in this presentation do not necessarily represent the views of the Department of Health and Human Services or any subdivision thereof. Types of LHS Studies. Looking for the Next Black Swan Instead of Chasing the Last One - . vicki bier university of wisconsin  . looking for

Chasing After God - . to chase-to pursue run after. to follow as to catch.some bible scholars believe psalm 63 was

A Silver Lining in Every Cloud? Or Chasing Away the Clouds? Teaching Optimism - . marilyn f. rasmussen, ph.d. rose stee,

Poem and song similarity - . pink fluffy unicorns . my mind. demented images for in my head to be wisped away by pink

Chasing, Fleeing, Dodging - . jen ronayne . what are these? . all – quickly travel chasing –overtake or tag fleeing-