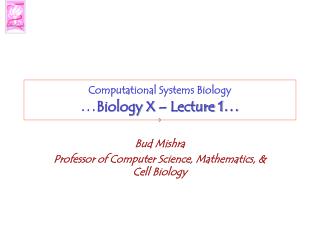 An integrated approach to computational Systems Biology: - From bimolecular interactions to the behavior of

By Xianfeng (Jeff) Chen Computational and Systems Biologist May 7, 2009 - Bioinformatics cyber-infrastructure for