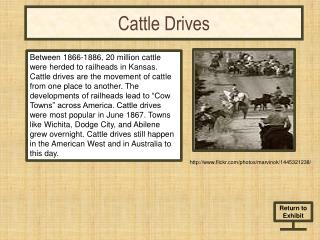 The Cowboy and Cattle Drives - . longhorn cattle… 267. the spanish explorers and missionaries brought cattle to texas.

Cow Towns, Cowboys, and Cattle drives - . home on the range-lyrics oh give me a home where the buffalo roam, where the

Cattle - Stress by a cow produces less milk. there are many external things that slows down the production, growth, and

Cattle - . breeds. how many of you love to eat cheese, meat, ice cream or drink milk? did you ever wonder where these

Cattle breeds - . kail wilkerson and markanne geary. angus is a beef breed. they came from scotland. ranchers like them

Cattle ranchers - . eq: how did the development of the western cattle industry in the years following the civil war

Cattle Unit - . ms russell. what you will learn:. breeds of cattle body parts of cattle cattle terms different types of