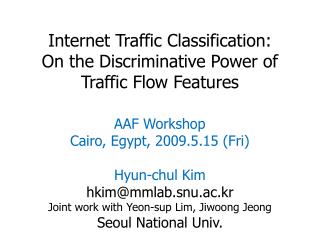 How to Increase Blog Traffic in 3 Easy Ways - To get more cool online marketing tips: http://dotcomgains.com how to

ESOL for Driving - Sample questions from the (road and traffic signs) unit of the driving theory syllabus. road and

The Traffic Management Problem - . executive participating in a worldwide videoconference proceedings are videotaped and