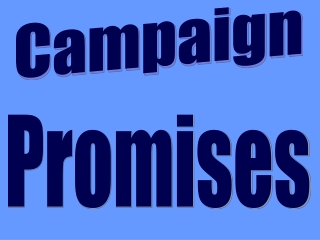 Campaign. Promises. Campaign Promises. Politicians are making promises and voters are examining their records to see if they kept them. If they aren’t kept, excuses or reasons are given. Maybe some had good intentions but because of unforeseen circumstances they couldn’t fulfill it. Welcome to the Combined Federal Campaign CFC 101 - . the who, what, when, where, why and how!. workshop objectives. to

Getting a Campaign off the Ground: Campaign 101 - . united way of the wine country june, 2010. what does it mean to

Campaign Finance 101 - . what is the difference between hard money and soft money? what is feca? what is the bcra? why is

Families Helping Families An Overview of the 2010 Campaign - . campaign history and mission. first campaign in 2009

What was the course of the Gallipoli campaign of 1915? - . presentation objectives. to understand the chronology of the