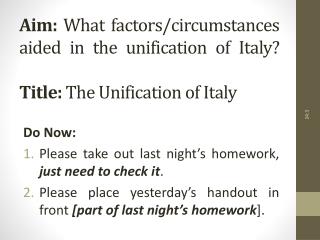 Please take out your homework &amp; write tonight’s homework in your planner! Do Now: - 1 minute : accessing prior

Please Do Now - . directions: please write your first and last name, today's date and your class period at the top of

PLEASE DO NOW! - . write your name and period on the packet i handed you when you walked in. turn the page to the

DO NOW!!! Please take out your HW and begin the Do Now!!! - . simplify the following polynomials as much as possible: 1.

PLEASE DO NOW - Welcome to biology with mr. deveney. monday 8/27. please do now. pick up papers and folders, on the far

Please do now - . in your journal, describe an experience with an animal you’ve loved. steinbeck’s the red pony.

TITLE: Misspelled Words DO NOW Take out your homework!!

Please Do Now - . make sure your hw is out on your desk . do not put it in the bin today. 2. clear your desk except for

Do Now : Take out your homework for inspection. - Ix/xix/mmxii. objective : to be able to pronounce and read latin with

Do Now Please hand in your homework . Have a seat and take out your notebook. - E.q. what were the outcomes of the

Please Do Now - . with hocked gems financing him, our hero bravely defied all scornful laughter that tried to prevent his

Please do now: - . draw free body diagram for object a and object

Please do now: - . what makes a fairy tale a fairy tale? what are the characteristics of the genre? on a piece of paper,

Do Now: Take out your sources you read last night. Review them for a minute - . discuss with your groups: summarize for

Please Do Now - . make sure your hw is in the aec hw bin before the late bell rings. 2. clear your desk over everything

Please Do Now - . put your hw on your desk. at the bell, write down your homework and clear your desk. homework : 1)