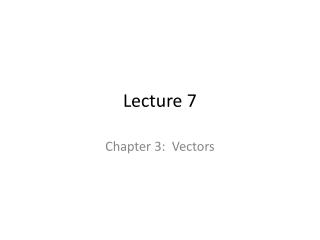 Lecture 7 - . syllable weight. english word stress. the account of english stress presented so far only works for a

Lecture 7 - . basis of a representation: a set of objects capable of demonstrating the effects of the all the symmetry

Lecture 7 - Philosophy of music. lecture 7. homer, iliad. he bursts upon them all, bursts as a wave that from the clouds