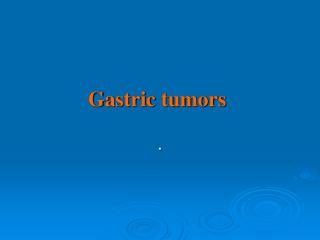 Gastric tumors. . BENIGN TUMORS :. Leiomyomas: smooth muscle tumors, equal in men /women, typically located in the middle &distal stomach. Can grow into the lumen with secondary ulceration & bleeding. or expand to the serosa with extrinsic compression. Tumors - . prepared by : dr. nehad j. ahmed. cancer is a disease that results from abnormal growth and differentiation of

Tumors - . tumors affecting the visual system are the source of the largest liability claims and judgments against

Gastric Bypass - Gallbladder is a pear-shaped organ attached to the under surface of the liver. its main function is to

Gastric Balloon - With bariatric surgery, youu2019ll learn a whole new, healthy way of eating. and enjoy it. and not be