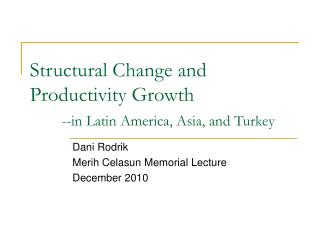 Structural Change and Productivity Growth --in Latin America, Asia, and Turkey. Dani Rodrik Merih Celasun Memorial Lecture December 2010. Structuralism is back. Not in the sense of distrust of markets or underestimation of the role of incentives WELCOME TO TURKEY - . have you ever visited turkey?. if your answer is no, now is a good opportunity to see turkey .

South American Geography - . enter. first, lets get acquainted with the globe…. we will be studying this continent. hom

Productivity Growth in Agriculture in Latin America and the Caribbean - . presented by carlos ludena. outline. importance

Turkish Culture - . by: kyra burke 8c. where is turkey?. turkey is a unique country. turkey is in two continents, europe

Geographic Understandings of Latin America and the Caribbean