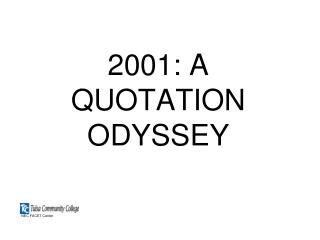 2001: A QUOTATION ODYSSEY. NEC FACET Center. Learning to use quotations can seem like a voyage into uncharted territory…. You may find yourself lost in space, asking:. How can I know when to use quotation marks? How do I punctuate quotations? Quotation Marks - . &quot; &quot;. use quotation marks at the beginning and at the end of a direct quotation. joe

The Use of Quotation Marks Mini-Lesson - . excerpts from “new country, same you” (take out your quotation marks rules

The Odyssey By Homer - . background information. what is an odyssey? a journey through life (universal) = man trying to

The Odyssey - . an introduction. homer. believed to be the author of both the iliad and the odyssey (7 th or 8 th century

Rules for Formatting and Punctuating Dialogue - . rule #1. use quotation marks to begin and end a direct quotation.

Quotation Punctuation - . bell work 4/16. when using quotation marks to show that someone is speaking, it is important

Quotation Review - . let ’ s see what you know. a few more rules…. use single quotation marks to enclose a quotation

Odyssey Standalone vs. ILLiad/Odyssey - . what is the difference? tony melvyn oclc. osu experiences dramatic increase in