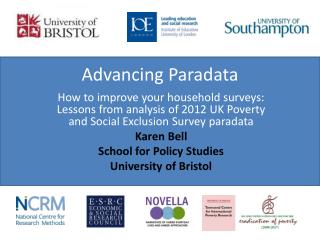 Advancing Paradata. How to i mprove your household surveys : Lessons from analysis of 2012 UK Poverty and Social Exclusion Survey paradata Karen Bell School for Policy Studies University of Bristol. What this session might help you with (a bit):. Understanding the usefulness of paradata Advancing Excellence - . tools for the ombudsman toolkit infections we will begin in a few minutes. during the

Advancing Environmental Solutions - . how states and dod work together to bring innovative solutions to the nation’s

Advancing the Story - . broadcast journalism in a multimedia world. news stories and packages are no longer the job. if

ADVANCING THE ORDINARY - . with clinical transformation. advancing the ordinary . a discussion with ccio annual nursing