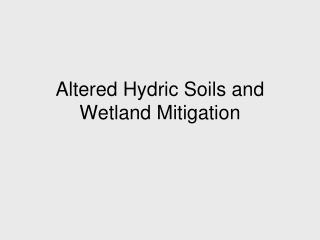 Wetland Soils - . definition of soil. a collection of natural bodies, made up of mineral and organic materials, that

Wetland Mitigation - . wetlands. wetlands are protected under section 404 of the clean water act. usace is the primary

Wetland Restoration and Mitigation - . by josie lami and cate ankersen. wetlands. wetlands are locations for aquatic

Using SOILTAXONOMY to Identify Hydric Soils - . soil taxonomy is. a basic system of soil classification for making and

Field Indicators of Hydric Soils in the United States - . version 7.0 and errata and all info on hydric soils can be

Hydric Soil Overview - . all information is based upon current deliberations and recommendations of the national