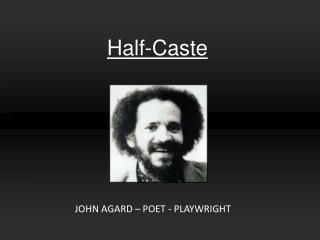 Half-Caste. JOHN AGARD – POET - PLAYWRIGHT. About the poet. 'The diversity of cultures here is very exciting'. John Agard came to England from Guyana in 1977. Like many people from the Caribbean, he is mixed race - his mother is Portuguese, but born in Guyana and his father is black. Half-Caste - . learning objectives: consider the context of the poem use the poem to consider cultural implications and

Half-Caste - . roots and water. m.l.o. to find out about the term ‘half-caste’. john agard. look at the picture of

Half-Caste - . roots and water. m.l.o. to explode the poem and plan your essay. refer to your explosion diagram. essay

Half-Caste by John Agard - . half-caste by john agard. mini task 1 write a few words about a time when someone insulted

Caste - . hindus are born into a caste. people cannot change castes unless moving down because of a dharma violation.

Caste System - . the caste systems is a division of society into distinct social classes that are created by birth or

Caste System - . quick facts about the caste system. the indian caste system has been in use for many years.  still

Indian Caste System - . what is the caste system?. indian society developed into a complex system based on class and

Landscape of Caste - . ‘ transmission of craft-knowledge created occupational castes’ (64). shift from hierarchy of