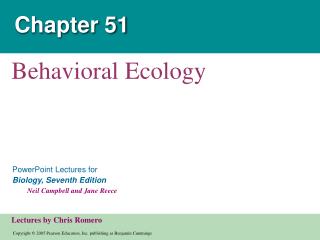 Chapter 51. Behavioral Ecology. Overview: Studying Behavior. Humans have probably studied animal behavior for as long as we have lived on Earth As hunters, knowledge of animal behavior was essential to human survival. Ch 51: Behavioral Biology (aka: Ethology) - . behavior is defined as what an animal does and how it does it visible