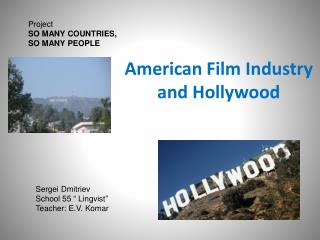 American Film Industry and Hollywood. Project SO MANY COUNTRIES, SO MANY PEOPLE. Sergei Dmitriev School 55 “ Lingvist” Teacher: E.V. Komar. Goal:. to research the development of the film industry in the USA and the Hollywood phenomenon as part of American culture. Contents. The Impact of German Expressionist Films upon the Modern Film Industry By Blayne Ferreira - . the origins of

MSE 550 - . presentation #2. what is a thin film? science background overview of film growth crystal structure and