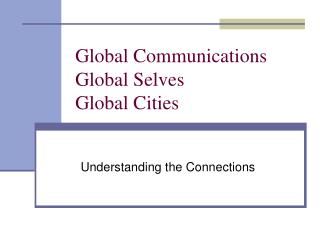 Global Communications Global Selves Global Cities. Understanding the Connections. WHAT HAVE WE LEARNED?. about content & context? about identity? about space & place? about community?. CONTENT. language is not a reflection of reality but a model of reality Global Marketing Communications - . global attitudes towards advertising. when is globalization appropriate?. brands that

Global Cities: An Introduction - . necessary characteristics cultural multi-cultural and multi-community (in the west)

Global Cities in India - . walt about to the southern indian city of bangalore. key questions: how is life changing in

Global Communications Summer Task - . by george bridson. the past: my

Implications of Global Communications - . learning objective:. by the end of this topic you should be able to: discuss