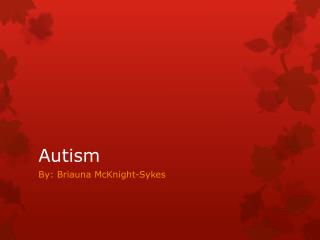 Autism. By: Briauna McKnight-Sykes. What is Autism. Autism spectrum disorder (ASD) and autism are both general terms for a group of complex disorders of brain development Since May, 2013, all autism disorders are merged into one umbrella diagnosis of ASD Autism - . by: kaity o’hara. social interaction symptoms. failure to establish relationships with kids their own age.

AUTISM - . overview. what is autism? is there more than one type of autism? what causes autism? how is autism diagnosed?

Autism - . “a mental condition, present from early childhood, characterized by great difficulty in communicating and

Autism - What to expect during this presentation?. introduction to the

Autism - . chapter 11. what is autism?. developmental disability that affects a student verbal and non-verbal

Autism - . by: suzanne young. what is autism?. autism is a developmental disorder that appears in the first 3 years of

Autism - . download the following powerpoint onto your computer, then screen clip it (or write it) into your one note. .

AUTISM - . what is a disability?. our textbook defines section 504 as: as a person with a disability as anyone who has