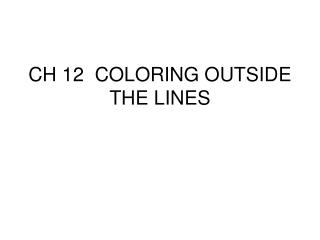 Outside the Lines studio - . the studio is near the corner of academy and townes. you can not get there from academy..

CSOA Working Outside the Lines - . venue prep “101”. purpose. reenergize the membership on csoa’s mission to

&quot;Outside of the Lines&quot; - . dry point etching printmaking. caravaggio was one of the most influencial

Ch. 27: Industrialization Outside the West - . japan. the final decades of the shogunate. on the surface, japan

Tangent &amp; Secant Lines Angles OUTSIDE the Circle - . diameter and tangent line. semicircle is 180 °. if de is

Ch. 12 The Heart - . -the function of the heart is to pump blood through the arteries, veins, and capillaries. -the heart