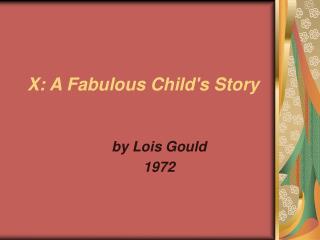 X: A Fabulous Child's Story. by Lois Gould 1972. Once upon a time, a baby named X was born. This baby was named X so that nobody could tell whether it was a boy or a girl. Its parents could tell, of course, but they couldn't tell anybody else. They couldn't even tell Baby X, at first. The Snow Child - . learning objective how does carter use symbolism within the story? . key term: allegory a story that

The Anatomy of a Story - . the 4 must haves. resolution brings clarity to the story. it’s not just about the story but

Cut-up Sentences - . 1. introduce the book, discuss the title, author, illustrator, and cover. 2 . read the book with

‘The Child’ - . a short story written by ali

Short story unit - . 6l10 what techniques do authors use to develop a story?. do now. 1. o n the next left hand page in

Writing Fabulous Introductions - . what are some way in which we can create a fabulous introduction to capture the

Introduce today’s lesson by talking to your child about the songs your child likes - The lord is my shepherd. 26