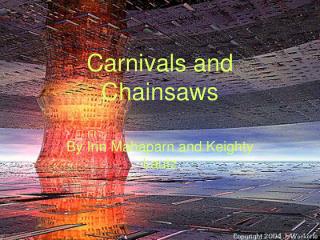 Carnivals and Chainsaws. By Irin Mahaparn and Keighty Lautz. The Commencement of the Adventure.

Carnivals - . south africa is a colourful, full of vibe and joyous country. here are some of the carnivals we have: n

Electric Vs. Gas Chainsaws - If you are thinking about getting a chainsaw, it's important to know which would be better

The Amazing Pirate Costume for Parties & Carnivals - A pirate costume you know that it can all be over. fortunately,

Tips to Choosing Between Gas and Cordless Chainsaws - When it comes to home improvement projects, one of the best tools

Guidelines For Finding The Best Chainsaws - PDF - Chainsaws are usually needed for cutting wood. earlier, only the