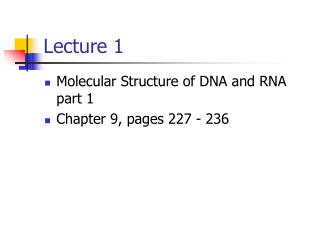 Lecture 1. Molecular Structure of DNA and RNA part 1 Chapter 9, pages 227 - 236. What is genetics?. It is the branch of biology concerned with the study of heredity and variations. Mendel.

Lecture № 1 1 - . the most important derivatives of the fivemember heterocyclic compounds with one heteroatom.

Lecture 1 - Probability and statistics part 2: statistics. lecture 1. statistics â€“ what is this?. scientific

Lecture 1 - . the iliad and the meaning of the humanities. epic. 1) a long narrative poem of heroic action  epic of

Lecture 1 - . the foundations: logic and proofs. disrete mathematics and its application by rosen 7 th edition. 1.1

Lecture 1 - Failure of versailles. lecture 1. examine the origins of american involvement in the war, with an emphasis

Lecture 1 - Muon detection. basics, all you always wanted to know about muons. lecture 1. how everything started . t he m

Lecture 1 - . ling 442. what is meaning?. meaning – what the speaker wants to convey literal meaning vs. pragmatic