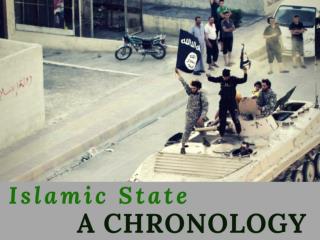 The militant Islamist group that has seized swaths of Iraq and Syria has its roots in the al Qaeda insurgency that arose after the U.S. led an invasion of Iraq in 2003. Battling Islamic State - Armies, militias, insurgent groups and rebels are all drawn into the fight against islamic state

Iraq retakes Tikrit - Iraqi troops have driven islamic state out of central tikrit, but the fight to retake all of saddam

Army of Assyrian Christians - Assyrian christians in the nineveh plains, with the help of a group of americans, are

AT THE DAWN OF A GLOBAL ISLAMIC REVOLUTION - . the only natural habitat for muslims. the islamic state. mohammad

THE INFLUENCE OF ISLAMIC LAW ON INTELLIGENCE AND LAW ENFORCEMENT INVESTIGATIONS - . wm gawthrop