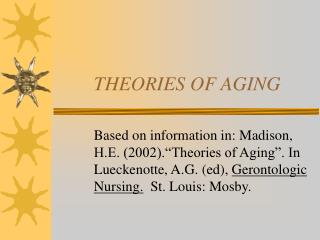 THEORIES OF AGING. Based on information in: Madison, H.E. (2002).“Theories of Aging”. In Lueckenotte, A.G. (ed), Gerontologic Nursing. St. Louis: Mosby. Theories of Aging: attempt to explain the phenomenon of aging as it occurs over the lifespan

Aging and Anti-Aging Research - Thank you for attending !. aging and anti-aging research. - an overview of the

Neuron Death in Aging and Pathology - . pathways to senescence. aging = an exponential increase in the likelihood of

THE FOUR RULES OF AGING - . 1) aging is universal 2) aging is progressive 3) aging is endogenous 4) aging-postmitotic

Individual Theories - . theories. much of the discussion in this section of the course centers on “theories.”

SUCCESSFUL AGING - . “how old would be if you didn’t know how old you was?” satchel paige. successful aging: what