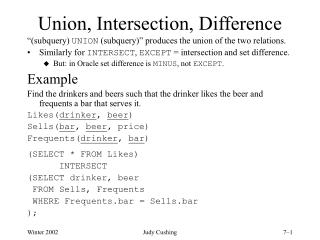 Union, Intersection, Difference. “(subquery) UNION (subquery)” produces the union of the two relations. Similarly for INTERSECT , EXCEPT = intersection and set difference. But: in Oracle set difference is MINUS , not EXCEPT . Example EUROPEAN UNION COUNTRIES - . what is european union?. the  economic  association of over

PART XIV SERVICES UNDER THE UNION AND THE STATES CHAPTER I.-SERVICES - . 309. recruitment and conditions of service of

The Difference it Makes - . phil daro. catching up. students with history of going slower are not going to catch up

Website design – the intersection of plain language and usability - . presented by www.plainlanguage.gov. what is plain

Union Role in Wage and Salary Administration - . identify the factors that affect wage determination in unionized

Researching Legal Information in the European Union - . presented by alison a. shea reference librarian and adjunct

Roadway Intersection Design In GEOPAK Site - . michael gilham bentley civil. presentation overview. what will we be

2.3 Set Operations Objectives: - . be able to p erform the set operations of union, intersection, complement, and