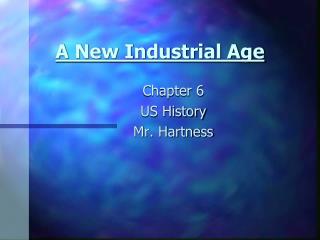 A New Industrial Age. Chapter 6 US History Mr. Hartness. Section 1 Objectives:. By the end of this lesson, you will be able to: 1. Explain how the abundance of natural resources, new recovery and refining methods, and new uses for them led to intensive industrialization.

Dawn of the Industrial Age - . mr. divett. industrial revolution. people used to live in farming villages. in the

Industrial Relations - . meaning. industrial relations is a multidisciplinary field that studies the employment

The Industrial Revolution - . * what was it???. a change from an agricultural society to an industrial society.

THE INDUSTRIAL REVOLUTION - . outline:. life before the industrial revolution why in britain first? the first industrial

Industrialization - . unit 2. questions:. how did you feel after the “assembly line” activity? what problems do you