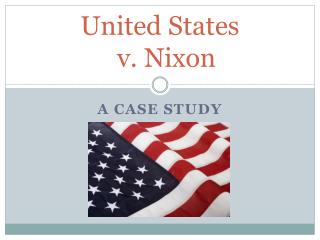 United States v. Nixon. A Case Study. Separation of Powers. The division of the powers of government among the different branches Separation of powers is a primary strategy of promoting constitutional or limited government by ensuring that no one individual or branch can abuse its powers Ch. 7 America Enters the World Stage - . section 1: the lure of imperialism what is imperialism and why does america

Citizenship/Civic Responsibilities - . citizenship. state of being a citizen of a particular social, political, or

The United States of America USA - . by maéva buisson – 4b. map of the u.s.a . a minimum of things to be known about

Nixon and the Presidency - . united states history. at the beginning. richard nixon was elected in 1968 after losing the

United States History - . george w. bush was what number president?. 43rd. which president’s face is on the penny?.