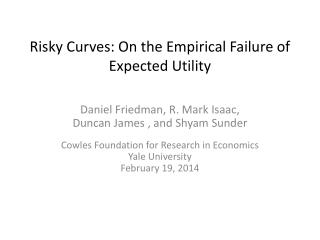 Risky Curves: On the Empirical Failure of Expected Utility Risky Curves: On the Empirical Failure of Expected Utility

Consumer Preferences, Utility Functions and Budget Lines Overheads - . utility is a measure of satisfaction or pleasure.

CHAPTER 8 Risk and Rates of Return - . investor like return but dislike risk, thus they invest in risky asset only if

Chapter 8: Cost Curves - . a firm aims to maximize profits in order to do this, one must understand how to minimize costs

The Area Between Two Curves - . lesson 6.1. when f(x) &lt; 0. consider taking the definite integral for the function