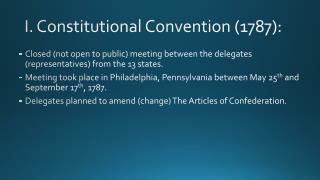 I. Constitutional Convention (1787 ):. Closed (not open to public) meeting between the delegates (representatives) from the 13 states. Meeting took place in Philadelphia, Pennsylvania between May 25 th and September 17 th , 1787. Unit IB : Constitutional Underpinnings - . the u.s. constitution. what is it?? unique, novel, born of necessity and

Bunker Convention - . a broad definition of owner to include registered owner, bareboat charterer, manager and operator

Chapter III - . powers of the national government. a useful distinction. allocation of constitutional authority among the

Constitutional Law - . branches of the public law. public law; - can be divided into five main branches; 1.