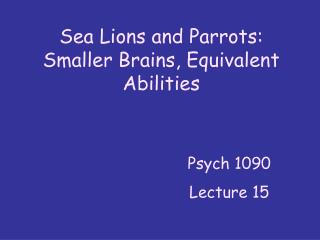 Sea Lions and Parrots: Smaller Brains, Equivalent Abilities. Psych 1090 Lecture 15. A few years after Herman began publishing his work on the dolphins, . Schusterman decided to see what a smaller-brained marine mammal might do … .a sea lion. Equivalent Quadratic Forms - . lesson 7.2. in lesson 7.1, you were introduced to polynomial functions, including

EQUIVALENT FORCE-COUPLE SYSTEMS - . section’s objectives : students will be able to: 1) determine the effect of moving

NeSA- INQUIRY, THE NATURE OF SCIENCE, AND TECHNOLOGY Abilities to do Scientific Inquiry - . sc 12.1.1 students will

The syntactic abilities of children with SLI: From Tense to Movement - . 37-975-01 challenges to language acquisition:

Lesson Overview - . 7.1 life is cellular. think about it . what’s the smallest part of any living thing that still

The syntactic abilities of children with SLI: From Tense to Movement - . 37-975-01 challenges to language acquisition:

EOC Review 1 - . whhs biology. cells and transport. differences between prokaryotes and eukaryotes which are readily

Atoms and the Atomic Theory - . all the matters can be broken down into elements. is matter continuously divisible into